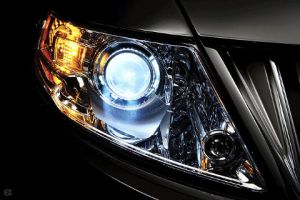 The old style glass car headlamps were marvellous. They were tough and sturdy in construction and hardly ever went wrong. However, as is so often the case these days, glass headlamps have been replaced by cheaper plastic ones. Initially they look just as good but after several years they start to tarnish and go cloudy.

Admittedly mine were about eight years old when they started to go. At first I just thought that all they needed were a good wash, that they were simply covered in a thin layer of persistent grime. Not so. No amount of cleaning helped. The garage also started muttering about how they would have to be replaced, and at considerable cost.

So I dug out some rubbing compound. It is a paste that is normally rubbed into newly painted car bodywork to polish it down to and blend it into the existing paintwork. I applied this and after about half an hour the creamy-yellowish cloudy look had greatly diminished. It managed to get through the next M.O.T.

However the cloudiness started to come back. I happened to mention this to a colleague at work and he said as quick as a flash, `Are what you need to use is Brasso.’.

Brasso is a mildly abrasive polish for Brass, Copper, Chrome and Steel. Not typically for plastic. Anyway, yesterday I gave it a go, just in case it was any good. Wow what a difference it made! Firstly the cleaning effect was more pronounced much more quickly. Instead of taking twenty minutes per lamp, this only took about five. Also for the first time in ages the cloudiness completely went, leaving a bright and completely clear headlamp glass. Admittedly the other headlamp will need a bit more work as it was more badly tarnished, but both look so much better than they have done for many years.

Certainly a tin of Brasso is much cheaper than the £200 or more I would have to pay for new headlamps.

One thought on “Tarnished Car Headlamps”

This site uses Akismet to reduce spam. Learn how your comment data is processed.

I have experience in C, C++, Perl and Python on Unix/Linux platforms. I also actively support GNU/Free software.